I few months back I wrote a post on what I would do if I had only six months to live: my no-regret bucket list. It was a list of steps I needed to take to heal relationships that are important to me: with my dad, with my brother and with my ex. Little did I know that the universe was going to conspire and deliver situations to me in no time that would catapult me into resolving them way sooner than I ever thought I would. The delivery was plain brutal in some respects, plain beautiful in others.

I got pretty far, pretty fast with the first item but then ran into an invisible wall when it came to the last five percent of decluttering: the shredding of the papers that I had gone through, the donation of books, the deletion of files on computers and old phones.

Once I realized that they all belonged to a past that was still very painful and that I could therefore not easily let go off, I cut myself some slack and gave myself the time I needed to approach this last bit of my decluttering project slowly, whenever I was ready.

I figured it was no coincidence that I couldn’t quite do it yet, as some of what I couldn’t part with was closely connected to the three relationship troubles that I had still not resolved. So in a sense it was quite natural that I was unable to perform the physical act of letting go before I had actually let go emotionally.

2. Visit my father, make him a gift I know he would like, and tell him how I would love our relationship to be.

Then universe knocked at my door, pretty forcefully so, and simply made me do it. With a mind-boggling, terrifying speed my dad suddenly got ill. Very ill. I had a mere ten days to do what I had vowed to do. Talk to him about us. And I did. We did. Those were the saddest and most beautiful moments I have ever had with him.

Of course I didn’t tell him how I wanted our relationship to be. There was no point to it anymore. He was dying. What I did do instead was tell him that I loved him. That he didn’t need to be ashamed, that everything was alright. And he told me that he loved me.

Only later did I realize that this item on my no-regret bucket list was somewhat poorly drafted. I didn’t want to tell him how I hoped for our relationship to be. What I really wanted was to connect with him once more, as deeply and lovingly as we had when we first saw each other again three years ago – after thirty years of no contact whatsoever. The universe (or whatever you want to call it) had understood this better and way earlier than I had and delivered a situation, an opportunity, that would help us do precisely that.

We might have missed a lot of opportunities in the last thirty years. But we didn’t miss this one. The most important one of all. I cannot tell you how immensely grateful I am that both of us knew exactly what to do, and did it, in those last moments we had together. It’s the saddest and most precious memory I have of my father and I will carry in my heart forever: Our parting. In total peace with each other.

After my dad had passed I had to face the gruesome task of going to his apartment, the one where we had met the first time again after thirty years, and go through his personal affairs, sorting out documents and collecting the letters that my sister and I had written to him in the last few years.

What I didn’t expect, though, was to find a letter that my brother, my half-brother actually, had written to him about thirty-three years ago, just after my dad had moved out of our home after my mom had separated from him. The letter was a touching letter of a child missing the only father he had ever known, even though it wasn’t his biological one. It was carefully written account of the latest events, sprinkled with an involuntary kind of humor that only a child can produce. I cried my eyes out when I read it.

My brother and I have barely spoken to each other after a massive argument about six years ago on Christmas (of course). He and his wife had said something to me and my ex that had hurt us very much as it had put into question our whole way of living and being. At that time I did not manage to just accept that this was his view and that it didn’t have to impact me if I didn’t let it. This how item number 3 on my list had come about…

3. Go see my brother and reconcile with him.

I knew I should contact him and try to reconcile. No argument and no being hurt is worth not seeing your brother for years. So when I saw his letter to my dad I decided to send it to him, together with a warmly written note about what had happened. And when and where the funeral would be.

I didn’t expect my brother to turn up, even though I certainly did hope so very much. But he did. When he arrived at the cemetery we looked at each other and he gave me a hug. It felt good, so goooood. When he was about to let go I suddenly had a wave of grief and sorrow wash over me and out of an instinct I suddenly held on to my brother just a bit longer than I normally would have. He must have sensed it and did the one thing that I truly needed: he hugged me very tightly. Without words. For a very long time.

It’s the moment all was good again between us. It didn’t take more than a hug. A real long, big hug. And yes, the crushing experience of the death of my and sort-of his father, I guess.

When we parted he suggested that we meet again soon, after his return from his imminent holiday. He isn’t the kind of person who would usually suggest that. He is very absorbed by his work and young family and I didn’t quite think he would follow up. But he did. As soon as he returned from his holiday he stood to his word, got in touch and we met. We had the longest conversation ever.

We never spoke about the argument. It really didn’t matter. We did however talk a lot about our family. About the things that happened after my father had moved out and we had moved in with our new step-father. I don’t want to go into detail here. Let’s just say those aren’t very good memories. And it was very painful to share them. But we did. And through it we connected in a way that we hadn’t for a very long time.

I don’t think we will see each other tremendously often in the weeks and months to come. After all he is not a big socializer. But I no longer have the feeling of being out of touch with my brother. We are in touch again. In real touch. He is back in my life. Just as I had hoped and wished for.

4. Tell my ex how I still feel about us.

A few weeks before the passing of my dad I gave my ex a letter that I had written about a year after our break-up (and put into the freezer to take out when I thought the time was ripe, following one of those how-to-recover-from-a-breakup tutorials… – ahem, yeah).

The letter said that even though the break-up had hurt very much, I also now understood why things had happened the way they had happened. And that both of us didn’t know any better then and had done the best we could at the time. I forgave my ex and asked for forgiveness myself. It also contained a not so subtle reference to the deep love that I still felt – and feel.

My ex was glad to be forgiven. And forgave me. But I did not get a response to the love reference. I guess a non-response is a response, too. Not the one I was hoping for. But at least I know now where I am at. Which is what I really wanted to achieve by doing item number 4 all along: Get clarity as to where we stand with each other.

I do have it now.

So, I guess now is a good time to tackle the leftovers of item number 1: the last five percent of decluttering. I have started putting together the remaining boxes of books to be donated, including lots of travel guides to places my ex and I have visited together. Soon I hope to be able to muster the courage to schedule for the shredding service to collect the papers documenting our years together in a rather mundane way – bills, rental contracts and the like. The toughest part will be filing and boxing away of photos and letters of my father.

The old wounds are certainly not healed yet. The sadness and grief is still within me, about the loss of my father and about what I thought to be the love of my life, and will linger with me for quite a bit longer, I’m afraid. At the same time I feel a huge sense of gratitude for the priceless gifts of connection and love that I have received in those last few months. And for the clarity I have gained. 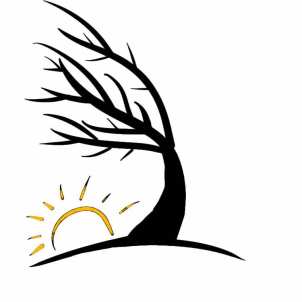 It was a very tough journey. Still is. I feel like a tree that’s been roughed up by a very heavy and brutal storm. Like I lost pretty much all of my leaves, if not a few branches, in the process. But I have survived.

And the best part of it: I have no more regrets. Just as I had planned. I can’t believe I have done my list, or pretty close to. Even though I’m still flabbergasted and shaken up by the way it has unfolded.

As sad and painful as part of it was and still is, I can now make room. Room for whatever new feeling, new love, new life wants to enter.

Can’t wait to meet and welcome them… while starting to stand up tall again, with no unresolved emotional baggage weighing me down, firmly rooted in the ground I have prepared.

6 thoughts on “No more regrets”

I'd love to hear your thoughts Cancel reply