My list has caught up with me. I didn’t think I was ready. But life thought I was. Last Monday I got a text from my aunty whom I’ve met only once in my entire life – three years ago, shortly after I first saw my dad again, for the first time after 29 years of no contact whatsoever. Last Monday my aunty told me he’d been brought into hospital and my very first thought was: I need to get there. I need to get there. And way earlier than I ever thought I would I did item number two of my no-regret bucket list…

When I first got the news I didn’t know yet how bad it would be. But I instantly felt this sense of urgency, this huge fear that we might not have enough time left to do what needed to be done, for the sake of both of us. I prayed that morning, despite not being religious, I prayed for time. Nothing else. Just enough time to see him and to talk to him. And for him to be able to understand. And maybe even talk back.

I was granted my wish.

We did see each other last Wednesday. And we talked. The topic of discussion had naturally shifted with the course of events. When I first wrote my no-regret bucket list a few weeks back and added item number 2  – visit my father, make him a gift I know he would like, and tell him how I would love our relationship to be – I had something different in mind: I wanted to talk to him about how we could be with each other in a more balanced way, being there for each other, but without any of us relying too heavily, or one-sidedly, on the other.

I was still trying to find my way, my role with him, you know, after such a long time of no tangible daughter-father relationship. And I thought I needed to practice with him what I had learnt recently in other areas of my life. That I needed to watch not just the needs of others, but my own needs, too, as I had depleted my energy reserves right down to the bottom over decades of over-caring for others to the detriment of my own health. ‘You can’t pour from an empty cup’, as they say.

Why practice with my dad? When we first met again three years ago, after 29 years of estrangement, we hit it off as nicely as one possibly could, given our history. However, after two years or so our relationship, still fragile, had turned a bit sour. My dad had called me a few too many times telling me that he needed me, I felt. I wasn’t mad at him (anymore) for not being there when I needed him for the best part of my life. I was, however, also not quite ready yet to be needed myself, by him. It was such a stark contrast to what I had wished for after all this time.

I gently told him so at the beginning of this year, choosing my words very carefully so as to not hurt him unnecessarily.

It was the last time we spoke for six months. He didn’t contact me for my birthday a few months back. It hurt. Nonetheless I tried to call him on his, one month later, but only got his voice mail and wrote him a card afterwards. To which I never got a reply. It looked like our story all over again for the second time.

When I wrote my no-regret list a few weeks back and added item number 2 – visit my father, make him a gift I know he would like, and tell him how I would love our relationship to be – I had planned on telling him that I wasn’t as strong as it seemed. That I needed him, too. Very much so.

Last time we saw each other, at Christmas last year, he told me that he’d always wanted a cactus. And that he’d loved to see it bloom. As it happens that same Christmas I was given a cactus by my mom. I silently vowed to pass this one on to him. Preferably right when it was blooming. I knew it would bring him a lot of joy. It would also be a cheeky way to reconnect him and my mom – the secret dream of any child of divorce – in a way that would do no harm to either of them. He’d never gotten over my mom. She was the love of his life. Even thirty years later he would still instantly cry when I just mentioned her.

Shortly after I wrote my list the cactus was suddenly in full bloom. It was a not so subtile nudge. I knew it was about time I saw him. Still, I could not bring myself to do it. I wasn’t ready. I was anxious about what might happen when and after we’d talked. I was scared I would loose him all over again. Like thirty years ago. Like six months ago. I could not face this prospect a third time.

It was the moment I forgot everything about what I had planned on telling him. It was the moment I realized that he had actually needed me when he’d called me, at least as much as I had needed him. The cancer he didn’t know he had had depleted his energy reserves, so much so that he couldn’t even contact me anymore later on. I was horrified at the thought of having left him alone in those last few months.

He took a deep breath of relief. The deepest I have ever heard.

My aunty left early to give us some space and time to talk. In actual fact, we didn’t talk much. Didn’t have to. I just held his hand for the most part. And he held mine. In between I also helped the nurse roll his bed to the X-ray station. In the elevator the nurse turned towards me and asked if I was his daughter or grand-daughter. He is just 25 years older than I am – which gives you an idea of how terribly old he looked. I told her I was his daughter. And he added, just barely audible: the best. She looked at me, all touched and teary-eyed, saying that she wished her dad had ever said something similar to her.

If only she knew.

Later on I fed him fennel tea using a sippy cup and helped him turn after another nurse had punctured his skin to insert a catheter without yet covering up the wound. I discretely tucked away the bag containing his bowel and bladder contents that another nurse had put on his blanket, for fear the bag would get stuck in a doorway, as we rolled him back from the X-ray. I didn’t mind. And neither did he.

Eventually I kissed his forehead, told him I had to leave to get my train, that I would see him again in a few days. And that I loved him. He very softly said I love you back – the first time he’s ever said this to me in my entire life – and closed his eyes to get some rest.

I didn’t know then whether it would be the last time I saw him, maybe even the last time he’d closed his eyes. A wave of emotions washed over me. It was one of the saddest moments of my life. And one of the happiest. At the same time. I never thought that those two feelings – seeming opposites, furthest away from each other on the spectrum of emotions – could co-exist so closely, so perfectly next to each other. Like they were touching. In the far distance. Closing a circle.

I didn’t know if I was going to see him again alive. But I knew that even if I wasn’t, it would be okay. He was in peace. And so was I. Totally in peace.

For the very first time in over thirty years.

I did actually see him another three times. Every time he got weaker and weaker. This morning the hospital called. His condition had deteriorated to a degree that the worst had to be feared.

I prayed again, this time for that he would not have to suffer, that he would be granted the grace of a peaceful and pain-free death. And that I would be able to be there for him when it happened.

I rushed to the train station and to the hospital.

I was the first to arrive, before all the other relatives. We had ten minutes, just the two of us, alone. He could not open his eyes anymore, nor could he talk. But I know he knew I was there. His breathing was very slow. The gaps in between getting longer. And longer.

I told him once more that I loved him. That everything was alright. And that I was so grateful he had waited for me. All throughout all of this I held his hand, not letting go of it for a second, not even when the other relatives arrived.

It’s as if he had waited for them, too. Shortly after they’d hugged him he took his last breath.

And passed away – peacefully and pain-free.

You know what? When I first went to see my dad three years ago and was standing at the front door of his apartment building, too scared to ring, I had prayed for a sign. And I had gotten one: A white feather suddenly falling down from a tree. So I rang. 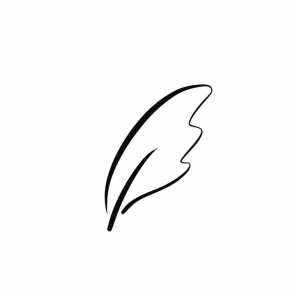 I didn’t mention this when I wrote that post about our reunion back then, for fear you might think I was a bit gaga. Last Wednesday however, when I left my apartment block to go and see him, a blackbird greeted me. I like blackbirds, so I turned around to smile at it and listen to it a big longer. That’s when I noticed it wasn’t all black. It had a single white feather sticking out of its tail.

It’s then that looked up the spiritual meaning of a white feather. I liked it. Very much so.

So today, right after I left the hospital for the train station, I silently prayed again, for a white feather, lots of white feathers, as a sign that he is alright wherever he is now.

A second later I spotted one. When I picked it up I noticed it wasn’t one – but two. A larger and a smaller one, unceremoniously stuck together by bird poo.

Think what you want… but I know my dad was always good for a joke. And this was a good one.

I smiled – and blew it away.

On my way home I saw lots more white feathers. They were paving my way. Caressing my train window as I slowly drove by. Dancing in the sun of my terrace as I was sitting there……. hurting and mourning – and being indescribably grateful at the same time.

Farewell, Papa.  I love you.  Everything is alright.  I hope you are, too.

PS: Debbie, this one is for ForgivingFridays especially. It’s about nothing but forgiveness – the strongest medicine, the best therapy ever…